The best of Running Races in Portugal in 2020

February has hardly begun and we’ve already participated in two amazing races this year! The first race of the year is usually the famous “End of Europe”. “Corrida Fim da Europa”, as it’s called in Portuguese, is 17 km race from the center of the picturesque town of Sintra, half an hour from Lisbon, to Cabo da Roca, which the most Western point of continental Europe (and what gave the race its name). Then, we went to the center of Portugal, to Miranda do Corvo, in the Lousã mountains, for one of the most epic trail races of Portugal: Trilhos dos Abutres. We did the 30 km race and had a blast! And now, we’re doing our best to recover fast for this weekend’s half in Cascais.

What are the best running races in Portugal in 2020? 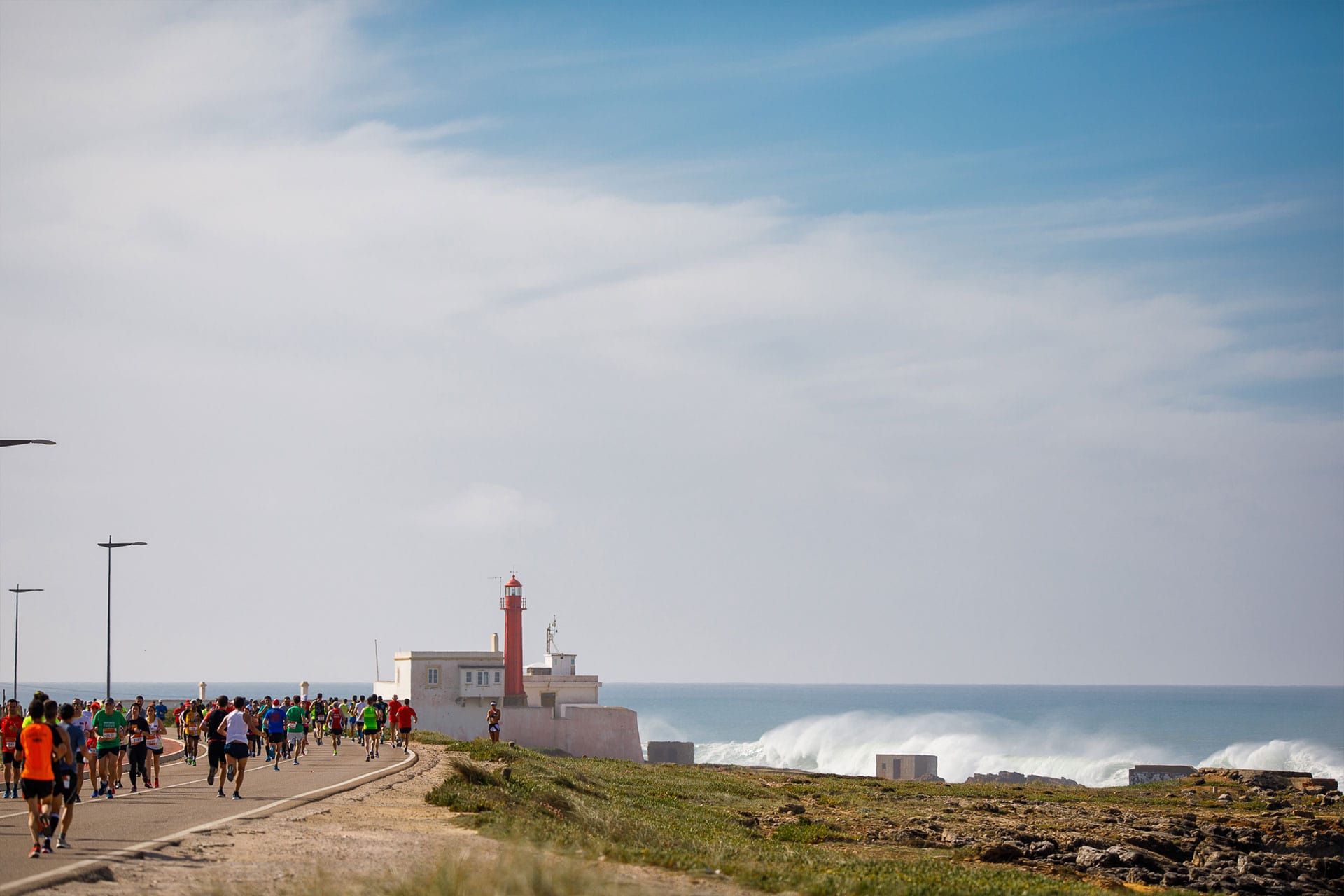 The best running races in Portugal in February 2020 are:

For road runners, we recommend the Half in Cascais, at the beginning of the month: Meia Maratona de Cascais. This event has a kids race a 5 km run and a half-marathon. For a fast 10 km race, we recommend heading to the southern beach area of Lisbon, Costa da Caparica for the GP Atlântico.

For trail runners, there are a lot of good races in Portugal in February. The first one is Columbus Trail on Santa Maria, the Azores, with a 72 km and a 43 km race. If you prefer staying in continental Portugal, we suggest: 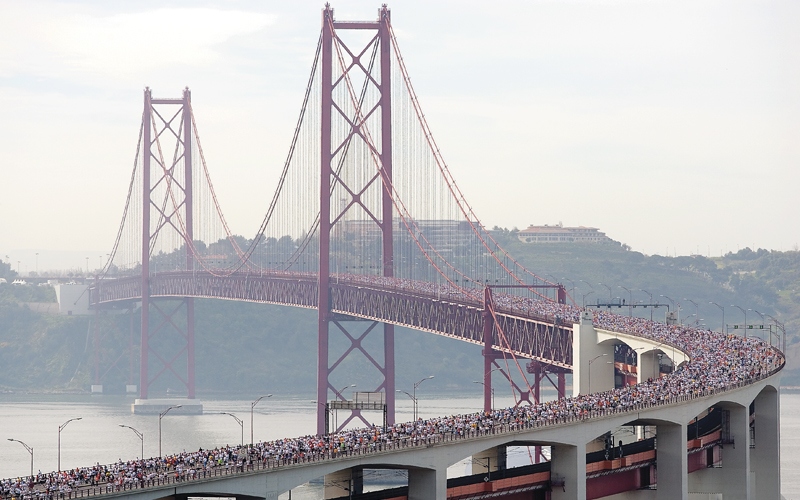 Half Marathon in Lisbon

The best running races in Portugal in March 2020 are:

At the beginning of March, there’s a very nice, rather authentic race near Lisbon, Corrida das Lezírias, in Vila Franca de Xira. This event hosts a kids race a 5 km and a 15,5 km race. It’s rather flat, so it’s a good one if you want to beat your 15 km best!

The highlight of the road running races in Portugal in March is surely the Lisbon Half Marathon, which also hosts a 7 km run. It’s the ideal chance to be able to run (or walk) on the 25th of April Bridge.

For the ones looking to get some dirt tracks, we recommend the Louzan Trail, in Lousã. The Lousã mountains are said to be the “meca” for trail running in Portugal. This event hosts a 43, a 30 and a 18 km trail race. And if you want to explore some of the islands of the Azores, join us for the Azores Bravos Trail. This event takes place on Terceira island. We’re really excited because it will be our first time running on this island and we’re the biggest Azores fans! You can choose to join us for the 55 km adventure or go safe on the (not so) short 30 km.

The best running races in Portugal in April 2020 are:

We’ve not been to the Maratona da Europa in Aveiro yet. But those who’ve been to this race are pretty fond of it! It has a full and a half-marathon and a 10 km race. April 25th is Liberty Day in Portugal to remember the famous Carnation Revolution that took place on April 25, 1974. On that day, if you manage to enrol on time, you can join the Corrida da Liberdade in Lisbon for free (11 km)!

Regarding trail races in April in Portugal, we suggest: 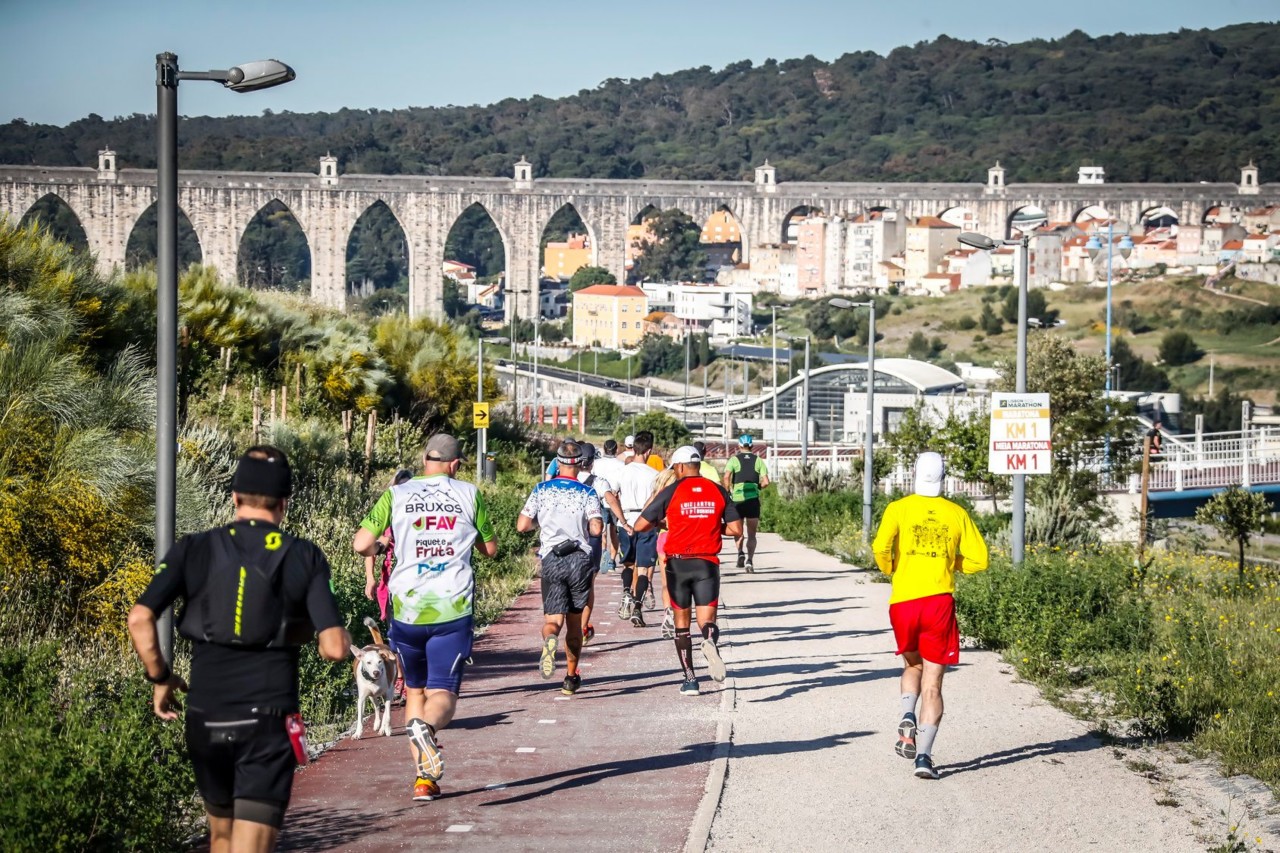 The best running races in Portugal in May 2020 are:

May is a pretty busy month for runners in Portugal! For road races, we recommend one of these three halfs:

And for trail lovers, it’s hard to decide which of these four to pick: 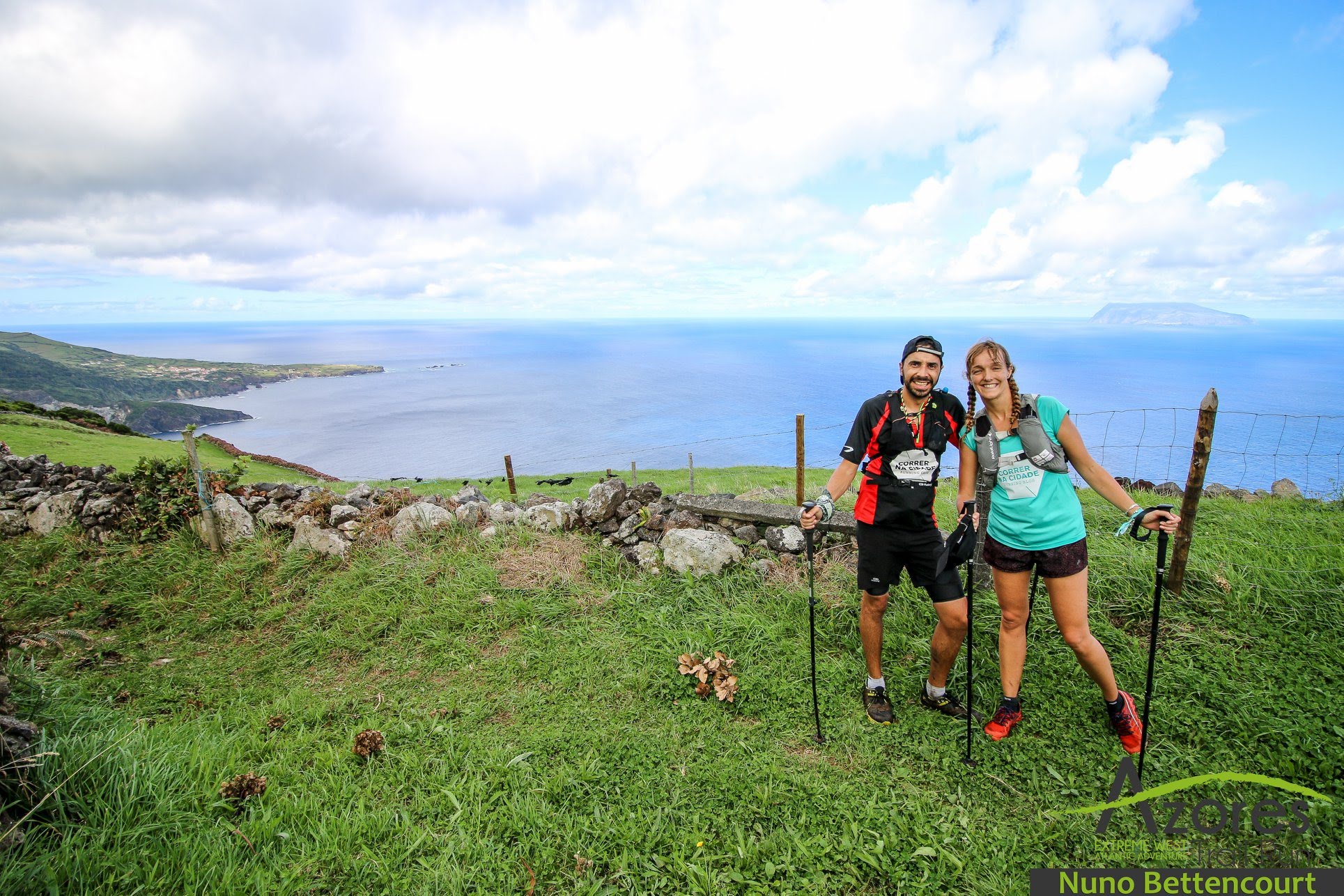 The best running races in Portugal in June 2020 are:

June sets the start of the warm summer season and there are fewer races to join. For road-runners, we suggest Marginal à Noite in Oeiras, near Lisbon. This 8 km race is ran at night on the road along the Tagus River. It’s a true party! Another party-race is Corrida das Fogueiras in Peniche (15 km). Some grilled sardines and a beer are a must after the race.

If you prefer trail running in Portugal, we have three recommendations. Oh Meu Deus means “Oh My God”.  I guess the name of this trail in Serra da Estrela says it all (160/100/70/20 km)! If you’re looking for something closer to Lisbon, Oeiras Trail is a nice idea. The distances of this race are more accessible too: 20 or 10 km. And on the islands of the Azores, in June we have the Extreme West Trail Adventure. We participated in this three-stage trail adventure on Flores and Corvo islands last year and we can say it was one of the best trail experiences ever!

The best running races in Portugal in July 2020 are:

July is pretty calm for road races in Portugal. We can actually only think of the Corrida Popular da Costa Nova in Ílhavo, near Aveiro (10 km). For trail there are a few more options:

The best running races in Portugal in August 2020 are:

August is the month of the Ultra Maratona Atlântica in Troia. We’ve done this race a few times now. But this year, we won’t be around. You can choose 43 or 21 km. For trail lovers spending their holidays in the Algarve, we strongly recommend the Ultra Trail Rocha da Pena, Rocha da Pena (55/24/16 km) 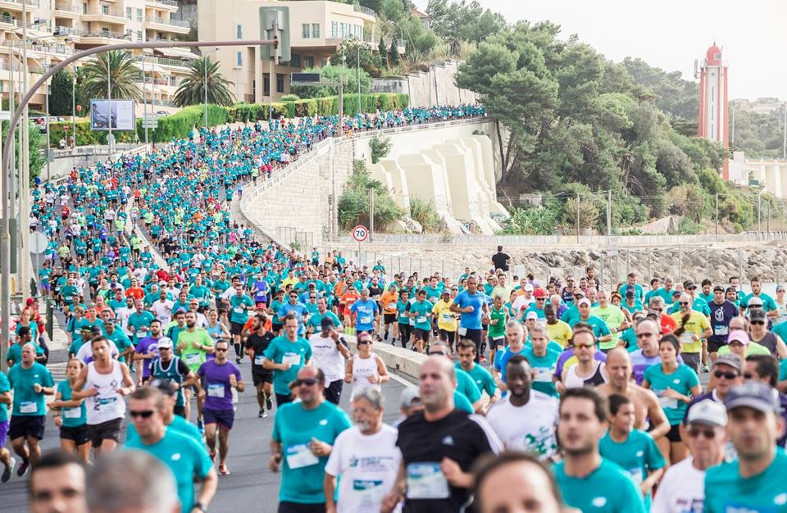 The best running races in Portugal in September 2020 are:

In September, the running season in Portugal starts picking up again. For many runners, the Corrida do Tejo in Algéns, Lisbon, is a reentré-race. It’s a 10 km long race along the Tagus River. It’s very scenic and the atmosphere is some of the best! If you’re looking for a half, you should go to Oporto for the Meia Maratona do Porto which also hosts a 5K race. If you want something longer and tougher, you can always head North and join the Grande Trail Serra d’Arga (43/25/15 km). 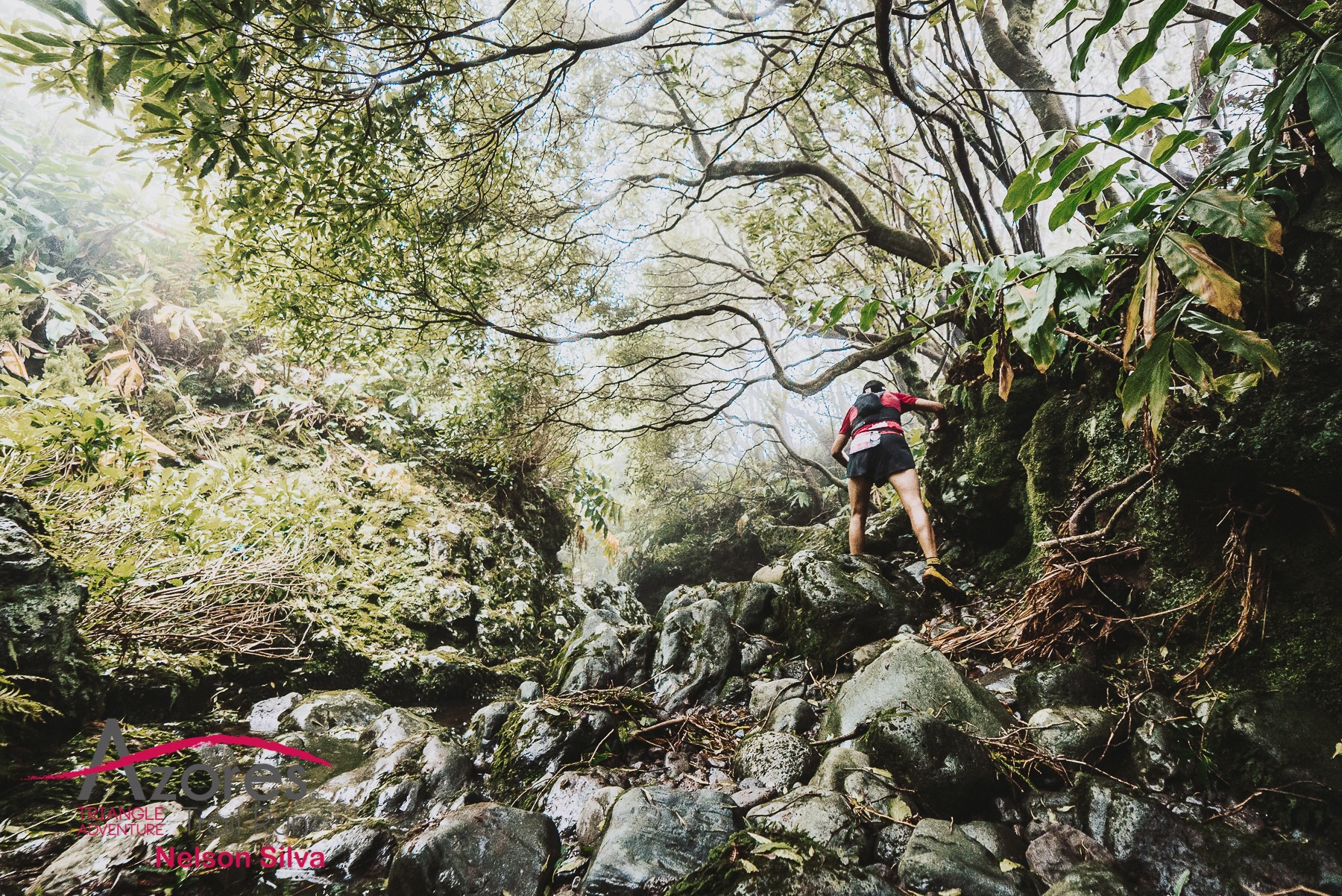 The best running races in Portugal in October 2020 are:

In October, two major races, one for road and one for trail, take place in Portugal. For road runners, Lisbon is the place to be for the Maratona de Lisboa. On the same day, you can also join the half or the 6 km race which take place on the Vasco da Gama Bridge. For trails, you should go to the Azores, for the unique three-stage Triangle Adventure. 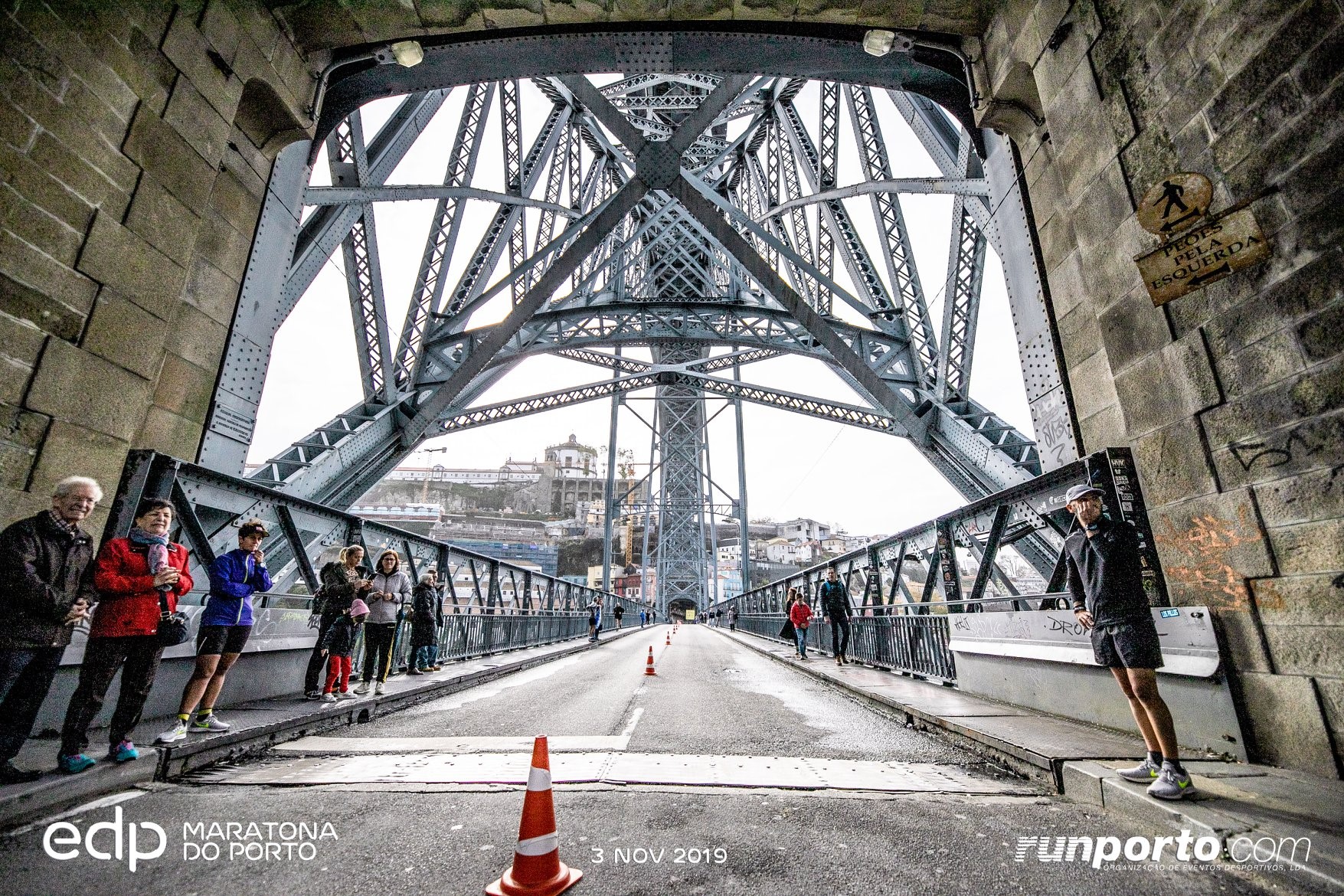 The best running races in Portugal in November 2020 are:

Some say the Maratona do Porto is better than the one in Lisbon. They say the atmosphere is much better as well as the route. We don’t know yet as, so far, we only did road marathons abroad! Give it a try! You can go for 42 km, 15 km  or even just 6 km.

Penacova, in the center of Portugal, is the perfect place for one of the biggest trail events in Portugal: Trail do Centro (43/27/17/10 km).

The best running races in Portugal in December 2020 are:

December is a busy month for runners in Portugal! The following road races are some of our favorite and there are even many more!

These are just some personal tips. If you’re looking for other types of races or on other dates and locations, feel free to contact us. We’re happy to help! And also, if there’s no race when you’re around Lisbon, let us know so we can arrange a sightrunning tour for you!